I have a morning ritual where I get up and read a little, write in my journal, and then pray and meditate. I take anywhere from thirty minutes to two hours depending on how much time I have on a given day. This is an unedited journal entry from February 4th, 2014:

“Slept four hours, woke up at 2:30am. Began to pray for monarch butterflies, honeybees, bats, horses taken to slaughter, dolphins butchered in Japan. I know it’s human consciousness that changes everything. A hundred years ago ladies wore birds and foxes on their hats and collars as if it were nothing, so many animals were wasted for the sake of silly adornment – cranes and songbirds.

Sherwin Williams Paint has a clever logo of a paint bucket covering the world – which is kind of horrible when you think about it, but that’s a similar image to how I envision my prayers.

I imagine the earth and I imagine pouring love over it. What is prayer but that? Prayer isn’t beseeching the almighty for things, to me prayer is plugging into the cosmic consciousness. It’s voicing an intention in my heart, a hope, a wish, a dream, a desire, and sending it out there like a beacon, a signal. Beep Beep Beep. Someone or many someones pick up on it. Prayer to me is voicing the heart’s hopes and dreams, and putting emotion behind it. It’s an act of love, it’s love expressed – and that’s why I not only think it helps, but it works.

I can’t stop the butchering of dolphins today. I can be mad about it, and try to raise awareness, change laws, spread the word, and so on. In the meantime I can pray for them, telepathically send them love, like an emotional care package. When I pray I’m not trying to save anyone’s soul, I’m sending them love.” 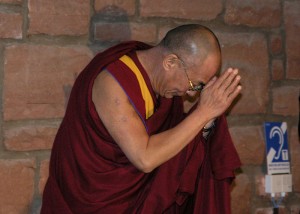 This is why I like the Dalai Lama’s prayer so much. Some people say, oh he’s just having a conversation about peace. He’s not really doing anything. Some people think that for a religious leader to actually do something, he has to take charge, divide the sheep and the goats, strike with an iron rod.

A few weeks ago, His Holiness, the Dalai Lama, opened the United States Senate with his prayer. He read it in his native language, and then translated it into what he called his ‘broken’ English:

“With our thoughts we make our word. Our mind is central and precedes our deeds. Speak or act with your pure mind, and happiness will follow you like a shadow that never leaves.”

“May there be joy in the world with bountiful harvest and spiritual wealth. May every good fortune come to be and may all our wishes be fulfilled.”

He finished with what he called his “favorite prayer” – the part of the prayer that he said gives him his “inner strength,” and I might add, what helps to make him the Man of Peace that he is so respected for being.

“As long as space remains, and as long as sentient beings remain, until then may I too remain, and help dispel the misery of the world.”

Speaking aloud this sort of intention helps to shift our mental attitude and our consciousness. It makes us feel that our frustration over suffering is not futile. We don’t have to hate what we dislike. We don’t have to skewer those that we perceive to be our opponents. As we join with others who wish to ‘dispel the misery of the world’, the power of that thought has great power. It helps to quietly erode the foundations of the world that cause suffering, and it helps to replace them with an attitude that is not only beneficial to everything and everyone, but is sustainable because it draws from the well of divine love.