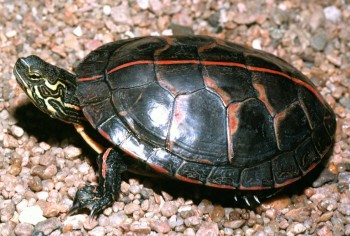 Today Peter and I walked there, and we saw three turtles, each about the size of half a cantaloupe. Actually, we may have seen the same one twice, because the scattered pollen on the second one’s back looked similar to the first one, but it was traveling in the opposite direction. Peter picked him up and asked the turtle for permission to stroke its head. When he petted it with his finger, the turtle extended his little neck as if he was enjoying the rub. Then Peter set him down and he crawled away in the tall grass, heading toward the water. We can make friends anywhere!

This is the park we discovered last fall, and I have gone there now in every season. In the winter someone plows a path so that brave souls can still walk their dogs, although it becomes a treacherous sheet of ice. Last winter I used a ski pole to keep from falling. Our dog loves to go there, rain or snow, sleet or sun. It’s an off-leash park, where she can run her fill and have a little romp with other dogs we meet along the way.

It seems that every week the blossoms of one plant finish and a new crop of something else blooms. There were horse chestnut trees blooming, some kind of apple blossoms, buttercups, daisies, lupines, yarrow and Queen Anne’s lace, Jerusalem artichoke, and dozens of other wild flowers that I don’t know the names of – springing up, fading away, with other kinds taking their places. There are honeybees, dragonflies, and a few butterflies, though not as many as I want to see. I pray for their safe keeping and return. I saw one today, struggling in the dust. I wondered if it had been stepped on by someone. I moved it off the path to a bush.

In this tiny park (relative to the size of the whole earth), I am struck by the generosity of nature. It is genuine, and in its giving it knows no greed. It is innocent, and neither calculates nor deceives. That doesn’t mean that I’m not careful about poison ivy while hiking, or that I would pick wild mushrooms and them toss in the dinner pot without being sure that they were safe to eat. I mean that the design of nature is without guile, in the way it proliferates and conducts itself. When it is in its groove, it pulls out all the stops. The fragrances, the colors, the uninhibited mating dances, the babies that follow, and the lack of worry it seems to exhibit as it does its thing is unabashed, and overwhelming.

I see all of nature’s processes as models of love. They are humble models, not pushy and insistent. They don’t force us to notice them. Nature shows us how to co-exist if we’re patient enough to notice the subtleties. The model is there for our learning. I don’t think it’s an accident.