~ Seeing beyond the superficial level 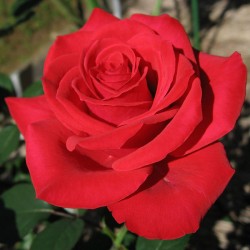 I’ve been reading Robert Sardello’s book, Freeing the Soul from Fear. Towards the end of the book, he posits that one of the ways we can surmount fear, or the unconscious triggering of fear in our daily lives, is through exercises in which we observe things, that is, to practice deep seeing. He talks about looking at a rose:

“If, instead of turning away from the flower and trying to capture an inner picture, you concentrate the mind on re-creating every aspect of the rose’s reality, you will begin to experience far more subtle qualities. These qualities can hardly be put into words – the extraordinary delicacy of the petals, the deep red hue, which does not at all appear as a colored object but as the very life of the color red. You become aware of the particular form of the petals, which are not so much a shape but gesture. And the smell goes right to the very center of your heart, a smell so deep you can taste it, a joining of fragrance with color.”

I love what he says about “the very life of the color red,” and “not so much a shape, but gesture.” What sublime observations. His book is about overcoming fear, but I think that this idea could also apply to the tendency we have to go through life on auto-pilot, unconscious of what is around us.

The suggestion to pause and see is a simple practice, but if it were used by the billions of people dwelling on the earth right now, what a huge difference it would make to nearly everything on earth. How different the world would be in the future if that became the average modus operandi.

After reading Sardello’s words, I thought about my own experience with roses. I once worked selling flowers that had been grown in South American nurseries. They were air-shipped in large boxes, twenty-five roses to a bunch, and twenty or so bunches to a box.

During the time I sold flowers, I didn’t see them as individual little miracles of nature–they were a “product.” The pesticides and chemicals that they were treated with wrought havoc on my fingers, not to mention the number of stabs from thorns that became infected during their handling. Most of them didn’t have much fragrance. I guess that in the process of developing varieties hardy enough to ship and survive out of water, the smell was sacrificed for durability. Hence, we sold “long-stemmed red roses” (and other colors) that looked nice, but didn’t have much fragrance. I could have been selling plastic flowers for all I regarded their intrinsic value.

Now when I think of how they were raised and handled, it seems to me that the South American flower farms, maybe operated in a similar way to other factory farms. The product is raised in huge quantities, are sprayed with chemicals, cut and bound together and shipped off to retail outlets. They sometimes suffer without water for days, especially if there are flight delays.

I considered the plight of the flowers. Their lives are short, but they convey the beautiful, quiet, giving example of nature. It is ironic that things which grow and reproduce all over the world in their natural state are used by those who may not see them–who do not notice their unselfish and open example. And because they seem “there for the taking,” so goes the extinction of animals and flowers and birds, living in the wild. Flowers, once wild, are now cultivated in mass quantities for profit, almost like little slaves, or prisoners.

It might seem a little kooky to call them slaves or prisoners, and of course, in the most literal sense, they are not. I just suggest that whenever anything is used and cultivated for profit, often it is reduced to having value only in regard to monetary outcome. This is why when someone thought up the heinous idea of gestation cages for pregnant pigs, they were only being considered as an end-use commodity, not as living beings with needs and emotions.

In a similar way, land has been taken hostage and developed–land that was meant to inspire the souls of humanity into perpetuity. This has become a curiously accepted given, and it makes me think of the Greek chorus of mice from the movie, Babe, who bleated out the phrase, “the way things are . . .,” regarding Babe’s destiny as pork–that money is the bottom line of life.

If that isn’t a horror-story plot run amok in our humanity, I don’t know what is. And by the way, the dictionary defines amok, or “run amok,” thus:

The inherent value of things are being sacrificed for money. With sincerity and a little long-term planning, land and resources might still be used for profit, but not with such disregard. They would not be dealt with in the most cost-effective, convenient way–(convenient for who?). I’m referring to things such as mountain-top removal, the metal mines of Indonesia extracting materials for smart phones and other devices where the habitat has been ravaged into a moonscape; things like the harvesting of exotic animals for the pet-trade that results in the death of most of the captured animals or birds during shipment; drilling for oil in places where the environment risks devastation, and the list goes on.

There are varying degrees of this all over the world, from technically lawful endeavors, to the most degraded forms of human trafficking. All of these industries are created and run by human beings, and those human beings have taken in other human beings to carry out the grunt work. The grunt workers want to feed themselves and their families, and the “bosses” know that there are people who are willing to work–in fact–to do almost anything to survive.

So, we have upon our innocent earth, a population of people who are seriously disconnected from their own humanity, who refuse to see, or don’t want to know, or who don’t care, or who are so poor that they don’t have time to think about the negative impact they’re making because they need to eat today. This paradigm does not consider future generations, it does not think about the fact that this way of life is shooting holes in the floor of our giant lifeboat, earth.

Dictionary.com defines the word, prisoner, as:

“1. a person who is confined in prison or kept in custody, especially as the result of legal process, 2. prisoner of war, and 3. a person or thing that is deprived of liberty or kept in restraint.”

There are prisoners who are in prison because they are a danger to society and must be kept behind bars for the sake of the safety of all, as described in the first definition above, of the word “prisoner.”

There are other prisoners who fall into category three: “a person or thing that is deprived of liberty or kept in restraint,” and they are myriad, who have been imprisoned due to the convenient quip, “It’s just business,” or because of greed, or a heedless attitude to the higher good.

There are thousands and maybe millions of people who understand these things. There is hope to change course for our precious earth and all its beings, but it takes consciousness, honesty, and willingness to sacrifice convenience for the right way to do things. We all benefit if we use our precious gift of conscience. It’s the only hope, but it is the most miraculous secret weapon, because there is one installed in every person, and it just needs activation.

But if you feel overwhelmed by all the terrible things going on all over the world, stop, and in the most uncorny way possible, smell the roses, and pause to feel how something so beautiful can help dissipate fear and hopelessness. The innocent and sweet rose will give of itself no matter what else is going on around it. It can’t help itself.