From the opening chords of “American Soul” I was riveted. Phil has an epic room-filling style. The title cut explodes with energy and a clever commentary on American culture including the mention of six pack abs, six point bucks, Abraham Lincoln and Robert E. Lee. He has an outstanding deep, masculine voice, and he really puts power behind it. He is a born singer/songwriter and sets the bar very high with production, backup vocals, and instrumentation.

“I’m Not Made that Way” is an emotional declaration of commitment and reassurance, full of energy and passion.

“Been to hell, and gone for broke,
seen it all go up in smoke,
but that’s okay baby, yeah that’s okay.” 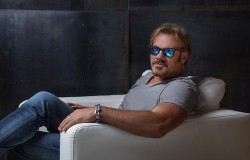 “Mississippi” has a twangy, zippy, upbeat tune and clever lyrics about an earthy woman who works as a waitress and knows all the lyrics to his songs. Throw in a little banjo and Phil’s earthy energy.

“Mississippi!
She was born in the spring in the summer of love,
drives a beat up VW micro-bus
Wears bell bottom britches and a peasant blouse
works a late late shift at the Waffle house
Yeah*
Loves ol’Willy and the Grateful Dead
She’s a tie-dyed bonafide parrot head
Digs catfishin’ and skinny dippin’
She’s my little hippie from Mississippi,
Watcha gonna do with a girl like that?”

“The Sound of a Million Dreams” is a song to break hearts. Phil reminds me of Laura Nyro in the sense that he has written a large number of hit singles, some of them Number One, for famous singers such as Jo Dee Messina, Tim McGraw and Alan Jackson. Yet, he himself has such presence and musical strength. There’s nothing like a song sung by the person who wrote it. People loved The Fifth Dimension’s covers of Laura Nyro songs, but hardly anyone knew who she was. If you listen to her interpretations of her own songs, she flattens the ones who made them hits. She had ten times their fury, power and raw talent.

“The Sound of a Million Dreams” seems like the story of Nashville or of pop music in general. How many truly talented people have had to wade through the rules of the established system that makes it so hard for the truly exceptional to leapfrog over the mediocre? The undeniably talented David Nail recorded this song, and he has a beautiful country tenor voice, but I think Phil’s baritone leaves David in the dust.

“Seger was singing words I could believe it and Main Street was my street that night
So I called Samantha and asked her to dance with me under the pale moonlight.
She’s not with me now but she can always be found when I rewind that radio dial
Like it was then, I feel her on my skin and I’m back there for a while.

So I labor for hours cause I know the power of a song when a song hits you right
Pouring my soul into stories of life, hoping someone will hear one tonight
maybe my voice will cut through the noise and bring back an old memory
and out of these piano keys comes the sound the sound of a million dreams.”

Incidentally, “Main Street” is one of those songs I continue to pull over for. I still get chills hearing that lead guitar.

The duet with Sarah Darling, “Voice in My Head” is lovely as well.

“Your love is stronger than the voice in my head.”

“The Ballad of Pretty Mae” has a driving melody, you can hear Irish influence on this one. A dramatic story song!

This whole album has catchy tunes. Not a single dud. And Phil delivers with power and his signature passionate voice. I would totally bet that seeing him live would be one of the memorable nights of your life. He’s that good. You can reach him at philvassar.com, and check out his great presence on youtube.com as well.