To Honor the Noble Dandelion

In April, we got a flyer in the mail from a company called “Lawn Dawgs”, with a photo of a big fat dandelion in the grass. The flyer said, “The Dandelion is the Number One Nemesis of Lawn Owners.”

I say, “Cow puckey!” On this beautiful August day, I was glad to find a single dandelion in my grass, so I bid it a friendly howdy do. I have never liked plain, green lawns because they do not occur naturally. To me, they are to meadows and fields what plastic surgery is to the human face – a manufactured facade that covers something that is far more beautiful in its natural state.

Before the 18th century, formal gardens were designed symmetrically, eschewing the wild look of nature. The notion of dwellings surrounded with grass, was partially popularized by Lancelot “Capability” Brown, Charles Bridgeman and William Kent, who were among the forefathers of 18th Century British landscaping. They created gardens that reflected nature – sprawling lawns, groves of trees and shining lakes – creating park-like areas with small classical style temples, ideal for strolling on a summer's day. Of course, landscaping on this scale was enjoyed by and created for the wealthy classes.

Since the 20th Century, having a lawn or garden surrounding our domicile, no matter how small, has become the norm. Unfortunately, due to limits of space, and often lacking a sense of true beauty, suburban designers have adopted an automated style of 'mass production' landscaping, which violates the sweet simplicity and wisdom of Mother Nature’s design.

In natural environments we find grasses and wild plants growing together in harmony. The insects live among the stems; bees and butterflies pollinate; the birds feed at will; the seeds blow; and all grow in cooperation – hopefully co-existing with an appreciative humanity. Unfortunately for the environment, some well-meaning but ignorant soul along the way decided that clover, buttercups and dandelions were ‘weeds.’ Now we are faced with how to reverse decades of eco-damaging lawn care practices. 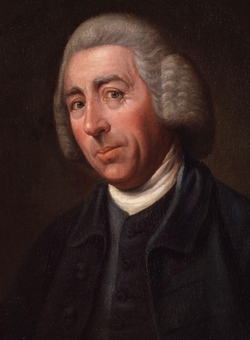 Lancelot “Capability” Brown, 18th Century British Landscaper – He seems to be saying with a little wag of a finger, “Do I spy a dandelion on your lawn?”

Herbalists, tea makers and natural medicine makers have known for centuries that the dandelion is a medicinal herb that aids digestion and the liver. They are a friendly presence and are here for our good.

When I see them in their yellow glory, to me they seem to be crying out, “I am yellow! I am the same color as your third chakra, YOUR SOLAR PLEXUS CHAKRA – hint hint! See my color, I’m good for your guts! Connect the dots, I am rich in beta-carotine, iron, Vitamins A, B2, K, C, E and calcium. I am an anti-inflammatory! Infusions, teas, and recipes made from me can help detoxify your liver and your gallbladder. I grow generously and freely. Please don’t kill me with pesticides!”

We are learning that modern notions of cosmetically attractive suburban lawns often ignore the big picture. Insecticides, pesticides and fungicides dumped into gardens and grass wipe out food for the pollinators and also kill worms and insects. Recently in the news it was reported that bee hive collapse may be partly attributed to these poisons as well, and that is a major crisis in itself. Little animals such as moles, voles and shrews that aerate the ground also suffer. In the process of eliminating so-called enemies, our ground water is in peril of being befouled by all the poisons.

Moles eat the larvae of Japanese beetles and help loosen the ground. Voles and shrews don’t have long life spans but they do provide food for birds of prey such as owls and hawks. If they have been poisoned either indirectly by chemicals poured onto lawns or by poisons such as D-Con, the results are devastating to bird life. Worms, grubs and insects that feed smaller birds die. Hawks, owls and other birds suffer from secondary toxicity. So-called ‘pest’ poisons are blood thinners, and once birds have eaten poisoned rodents, they bleed from the eyes, their digestive systems, or bleed to death in the event of a wound that will not coagulate. The average person is unaware of the domino effect in play.

My heart leaps with joy when I see a home that has wild flowers abounding in front, with clovers and dandelions blooming to their hearts’ content, and more natural occurring grasses growing. We once lived in a neighborhood where everyone’s lawn looked like green cake icing – bright, uni-colored, trimmed, edged, and squirted weekly by some guy with a chemical tank. I look at the banal uniformity and wonder how it ever became “the way we do things.” It doesn’t take a lot of thought to see that these practices have an effect on our health and on our beloved planet’s ecosystem.

But besides all of these reasons in favor of preserving the dandelions and their friends, I pose a simple question. To the mothers of the world I ask, “How many of us have received a bouquet of wild flowers from our young children, yanked from among the dandelions and buttercups of spring?” Though they droop and do not last long in a glass of water, their gesture of love is felt forever.