The Woods Were Alive With Bogey

~ This column was written in 2011. It seems a fitting eulogy after writing about Vinny in our last newsletter ~

I was driving to a friend’s house in western Maine one day in November. The autumn had shifted from a saturated blaze of colors to a muted, burnt-rust shade that permeated everything. I was on a country road with trees that formed a canopy overhead. It was like driving under the arch of clasped hands at a wedding procession of forest beings. I saw some wild turkeys in far off fields. I saw flocks of geese in fields too, feasting on something unseen. The day was heavy with the scent of fallen leaves and the sky seem to be pasted with varying shades of gray, oil-paint-thick clouds. 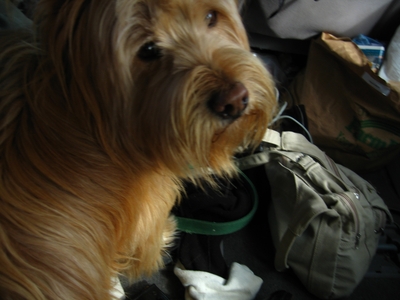 As I approached the village where we had once lived, I began to think of Bogey, the dog who had lived there with us. He was hit by a car just before we moved to Portland. I began to think of him – the essence of his character and personality which was so peculiar and unique. I visualized the muscle memory of the sweet, light feeling of his little body sitting on my lap. His doggy odor. The way he shook his thick mane like a lion. The way he stood guard at the window and barked his five-bark alarm: Woo! Woo! Woo! Woo! Woo!

When I tried to catalogue what it was that I loved about him, I found that I couldn’t name it exactly, but I began to summon him in my heart from across the unnamed worlds of the universe. An uncanny mood emanated from the woods, and I noticed that the trees were the same color as Bogey. It was as if a weather system of Bogey’s spirit flooded into the trees and leaves and sky. I felt my throat constrict before the tears came. I remembered that I was on the way to someone’s house and I didn’t want to arrive there with red eyes, so my first instinct was to detach from the tears – to push them away. But my body persisted and the pressure in my chest and throat pushed the emotion up and I let myself cry.

I wept for the little dumb-dumb head that he was – to venture into the front yard and then into that busy road. I had clipped him to his outdoor cable so that he could relieve himself in private. He was such a weird little dog that way. The clasp on the tie-out failed and opened. He was not used to being loose and he wandered off to have an adventure, and then didn’t know what hit him. It must have been ten minutes after I hooked him up outside. How many people feeling grief have said these words: It happened so fast.

That entire day, we searched and waited for him, not knowing that he was already dead. We called the animal control office to see if he might have been picked up, but they did not have him.

I fretted all afternoon, looking out the window for him every five minutes. Finally, I decided to consult a set of “Ask Your Guides” oracle cards, made by psychic, Sonia Choquette. I pulled a card and turned it over. The word “Suffering” was written on it, as well as “Sudden Loss”. I knew in that instant that he was gone.

Right after I drew the card I went downstairs to tell Peter about it. The phone rang at the same moment. It was the animal control officer. A veterinarian’s office had called them to report that a dog had been brought in that morning, who had been hit by a car. The dog was dead so the vet staff had placed him in a black plastic bag and stored him in their freezer. 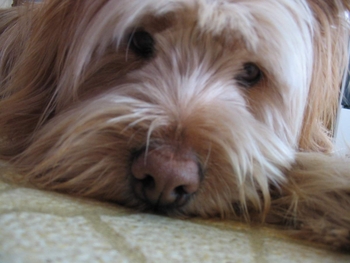 We called the vet and even though it was almost their closing time, they said we could come to see if it was Bogey. I asked what color the dog was, and they said he was brown. When we arrived, they placed the black plastic bag on a table and showed us the little frozen body. It was him. He did look brown somehow – so different in death, even though in life his coat was a gorgeous shade of orangutan. My first reaction was to throw myself on his body and sob hysterically, but we were taking the time of the employees who stayed late for our sake. Composing ourselves, we asked if we could get him the following day since there was no where to put him at our house until we could dig a grave for him. They agreed.

As I drove through the autumn woods enroute to my friend's house, I realized how many times in my life I had suppressed my tears. Sometimes circumstances deemed it to be inappropriate to cry. Other times I thought I was going to burden another person by showing my pain. Societal norms force people to sequester their sorrow into places which can become cemented over and forgotten.

How did our world become like this? Our very cells can become sad and we may carry blocked places in the depths of our psyches that seem to cry, “let me out!” 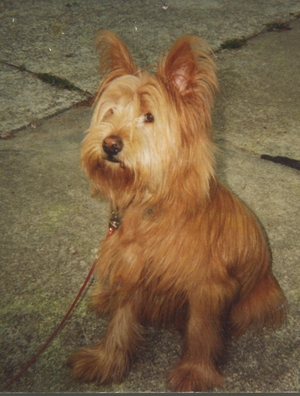 I visualized kissing Bogey on his forehead as I drove and I thought of him buried on the little hill behind our former house. I didn’t think I could walk up there to honor his grave since I didn’t know the people who now lived there. But I felt that he came out of his resting place when beckoned by my love. I felt the bond of our friendship present in the woods. I told Peter about my experience when I came home and then Peter dreamed about Bogey that night.

I honor the mystery in the power of thought and the power of love. I honor how we can ask something of the universe, and how it sometimes answers with such unequivocol response.