Our cat, Vinny, died about four months ago – most likely a victim of failing to look both ways before he dashed across the road in the middle of the night. A kind neighbor found him and mistook him for his own cat, cried over and buried him. Then his own cat returned, and he notified us when he saw our Missing Kitty Poster. We said our respects at his grave.

So, we are grieving. I am experiencing the grieving process as a hungry gnaw emanating from my cat heart gland. There is something innately comforting about cat presence. To paraphrase something Joni Mitchell once said, “Cats are the heartbeat of the house.” When the beloved kitty is gone, an eerie stillness appears - dark matter perhaps - where once purrs of contentment were generated. It’s hard to pinpoint, but I feel it. 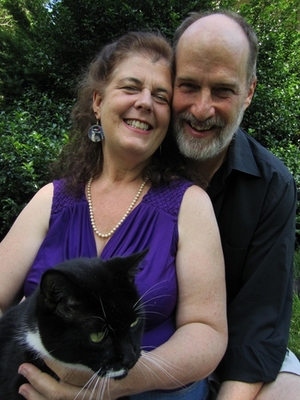 I recently entered one of my children’s bedrooms where a black hooded sweatshirt with a white design was tossed, and for a moment I thought it was my Vinny, curled up sleeping the way he did with his little head tucked in. When I realized it was just a sweatshirt, my heart sank for a moment. Then for several days I was fooled by it every time I entered the room, until I couldn’t stand it anymore and moved the darn thing.

I wonder what it was about the presence of a little being who didn’t speak English, and in fact, rarely said anything except for little high pitched sounds that amounted to, “Eh-Eh-Eh!” (Which is what he said, not “Meow”).  His relationship with us developed over ten years. He really didn’t like to be held, but if you were sitting cross-legged on the couch, so that the crossed leg formed a kind of triangle, he liked to lie on it as if on a tree branch. He had a beautiful, mottled, black and white tummy that was soft to bury your face in, and he was nice enough not to grab your head with his claws like some cats do when their tummies are touched.

Sitting in a chair, we might suddenly feel a shocking pin prick on our backside, because he liked to greet us by putting his paw there quietly and unsheathing a claw or two through our pajamas. He stood quietly saying, “Yow” or “Eh”, while repeatedly unsheathing the claw into our skin, which actually hurt like hell. There was no malice there; it was just a little attention-getting stab - his peculiar way of greeting us.

He spent most of his time on or around our front porch, lounging like a Roman God on the steps, stretched out in the sun, or lurking under the holly bushes, planning attacks on unsuspecting birds or rodents. When we drove into the driveway, he trotted out from under the bushes like a little concierge dressed in a tuxedo, greeted us with his little, “Eh-eh-eh”, and accompanied us up the steps and into the house.

When he was small he liked horseplay with the dogs (at one time we had three) and was an instigator of attack. By the age of ten though, he was annoyed by their “bite” games. Vinny’s absence has had an affect on Indi, our yellow Labrador retriever, who outlived the other two dogs. She liked to race out the front door onto the porch to touch noses with Vinny in the morning, or joyfully pounce on him when he appeared from under the porch. She has been truly grief-stricken and confused by his sudden departure, sighing listlessly and lying around, the lone animal. We all feel a bit out of balance, like a two-legged stool. It is hard to precisely identify the sense of loss but we feel it.

We are getting used to placing glasses of water or vases of flowers on tables once again. We could never do that when Vinny was here because he loved to knock them over when no one was looking. Now the little table where his food dishes were is occupied by a luxuriant Aloe vera plant. The litter box is stored in the basement.

A couple of weeks ago I sat on the couch and pretended to hold him as I once did, and told him how much I miss and love him. I still talk to him from time to time. I honor and respect the contribution he made to our family and long for the day when his sweet presence is with us again, however that occurs in the mystery of the beyond.