Maps to Ecstasy by Gabrielle Roth

teachings of an urban shaman

Posted by Kimmy Sophia Brown
I just recently realized that as a human being, and as a woman, I’m a late bloomer. I’m learning things now that other women of my generation understood twenty years ago. However, I’m not discouraged. On the contrary – I'm more excited than ever before to learn new things, and to serve and fulfill my life's mission during my remaining time on earth. 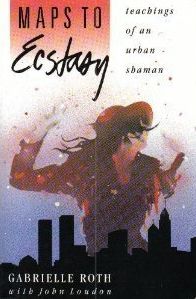 I am writing this recommendation to anyone who missed this book like I did, when it was published over twenty years ago. Ms. Roth discusses topics such as; Freeing the Body, Expressing the Heart, Emptying the Mind, Awakening the Soul, and Embodying the Spirit.

In January, I celebrated a gratitude ceremony with my women’s circle, focused on my 57th birthday. I called it a Gratitude Ceremony, or a Celebration for My Third Act – I even referred to it as a croning ceremony but I can't seem to like the word, "crone" – visions of the witch from Snow White come to mind, even though that image is supposedly far from the original meaning. In any case, the ceremony was meant to represent a crossing-over time in my life, from one era to the next. I read a couple of paragraphs aloud from Ms. Roth’s book from the section on “Imitation”:

Identifying totally with one specific way is not spiritual freedom but imprisonment. You can’t see beyond it. You make the teacher into a god, the teaching absolute truth, and end up unable to see the value and meaning of anything else. It becomes, as Doris Lessing puts it, ‘a prison we choose to live in.’

Imagination is the force that pulls your physical, emotional and mental energies into dynamic harmony, giving wings to your soul. When your imaginative life is rich and generative, you’re in vital touch with the rhythms and messages of your body, heart, and mind. You’re no longer saying “yes”, feeling “no,” and acting out “maybe.” You’re making art of your life, and the radiance of this creative living attracts others who want to live soulfully as well.

These are just a couple of examples of the juicy bits I found therein - ideas which are just as relevant today as when the book was published by New World Library in 1989. Ms. Roth has since written other books and has established dance therapies such as 5Rhythms. Check out her website at gabrielleroth.com.