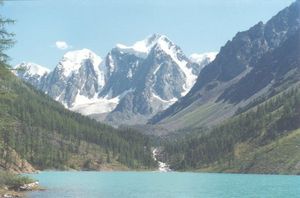 Olga Kharitidi, (who, by the way, is as beautiful as Grace Kelly), wrote this unusual account of her experience as a psychiatrist in a Russian mental hospital during the 1990s. While treating a patient for what seemed to be mental illness, she traveled with him to his village in the Altai Mountains, a remote area of Siberia. The uncle of her patient had been a local shaman who intended to bequeath his powers to his nephew before his death. The visit to the village enabled Dr. Kharitidi to meet an elderly woman named Umai, who was also a shaman. Umai saw a gift for healing in Dr. Kharitidi and taught her shamanistic healing traditions. Umai taught her to use her intuition along with her innate healing gifts in the treatment of her patients. Dr. Kharitidi remarked that during her stay she noticed that some of the residents were suspicious of her. After having endured persecution from Cossacks, Christians and Communists, they had developed a dislike of outsiders.

One of the things that I found most interesting about her narrative was her description of Russian life during the 1990s. I had no idea that people in post-Soviet Russia were still experiencing such a gray existence. For example, this is a description of the hospital where she worked:

Women orderlies tried to wash and clean the ward, but it was impossible to get rid of the pungent smell of human sweat mixed with urine, medicine and unpleasant stuffiness...

The one consistent thing about them was the pale, almost ghostly quality of their faces, with dark circles under their eyes. These people never saw the sky or breathed fresh air.”

No wonder the people were suffering from mental illness. I can’t imagine mentally healthy people coping in such a place. She described the probable chain of events of her patient, Nicolai. He came from his village to the city, looking for excitement and found work in a factory:

“I knew that as soon as young men and women got jobs at a plant their names would be put on a waiting list to get their own apartments. Sometimes it could take up to twenty years for a name to come to the top of the list. Occasionally a name might even get lost, and the happy reward of a private place to live might never happen at all. These unfortunate people would live out their working lives in dormitories where three or four people share a single small room. Sometimes as many as fifteen or twenty rooms would share one small kitchen area, one shower, and one toilet.”

She wrote that boys were conscripted into the Russian army by force. They suffered hazing rituals and were traumatized by their peers. This resulted in the most sensitive young men being sent to psychiatric hospitals. Human rights abuses seemed to be a way of life.

Even though the book was about the healing of trauma, I noticed that the power of love was not mentioned very much. She did relate folk tales about a place somewhat like Shangri La, called Belovodia. The people of the Altai Mountains talk about it as if it were heaven.

The glimpse into Russian life was as interesting as her experiences healing cases of suffering. Both aspects deepened my feelings of sympathy and compassion for people living in that part of the world.

Dr. Kharitidi currently works as a psychiatrist in Santa Barbara, California and is the founder of Cliffhouse Publications. You can visit her website at cliffhousepublications.com.

Published by HarperSanFrancisco, 1996
Photo of Altai Mountains in Siberia
Image(s) from Wikimedia Commons