The Power of Art - Maxim Gorky

A short story writer and novelist, known for his sympathetic accounts of tramps, criminals and peasants, in pre and post Communist Russia.
Born March 16, 1868 - Died June 14, 1936

“The good qualities in our soul are most successfully and forcefully awakened by the power of art. Just as science is the intellect of the world, art is its soul.” 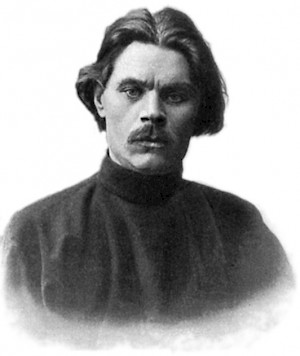 Maxim Gorky's real name was Alexei Maximovich Peshkov. He named himself after his father who died when he was young, and picked the word 'gorky' as a surname, which means 'bitter.'

In particular his biographical trilogy, Childhood, not only told his own story which was frought with emotional neglect and physical punishment, but revealed in a similar way as Dickens, the extreme hardship of the Russian people of his time. After suffering at the hands of an abusive grandfather and a kind but ineffectual grandmother, he found himself in the working world at a young age. He was beaten by employers, was often hungry and ill-clothed, yet retained his sympathetic and poetic ability to convey those conditions in his writing.

Before the Bolshevik Revolution he considered himself to be a Marxist and supported their cause, but after the extreme cruelties that befell the Russian people after the revolution, he became a critic of Lenin, which caused him to be silenced and exiled. His popularity was so great however, as a treasured native son, he was invited back to Russia from his exile in Italy to receive a lavish birthday celebration when he became sixty.

He was ever a champion for the underdog, and was deeply against motiveless violence. He supported imprisoned writers who weren't outright enemies of the state, helping them endure the hardships of hunger and cold in prison. His eye for detail and deep feelings allowed him to create a fascinating record of Soviet life during the time in which he lived. He was a five-time nominee for the Nobel Prize for literature.