Mechthild of Magdeburg - A Wondrous Place Where We Speak of Love 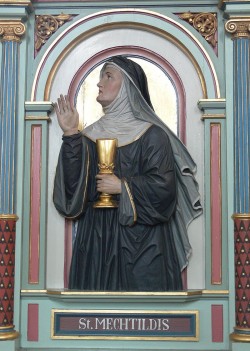 “That prayer has great power which a person makes with all his might. It makes a sour heart sweet, a sad heart merry, a poor heart rich, a foolish heart wise, a timid heart brave, a sick heart well, a blind heart full of sight, a cold heart ardent. It draws down the great God into the little heart; it drives the hungry soul up into the fullness of God; it brings together two lovers, God and the soul, in a wondrous place where they speak much of love.” Mechthild of Magdeburg

Mechthild of Magdeburg lived from 1207-1282. She was born in Germany, the child of nobility. At the age of 12 she had her first vision and continued to experience them throughout her life. In 1230 she became a beguine, which is an order of women who were evangelical nuns. They lived among the people rather than cloistered apart in a convent. This could be why she was free to write and express to others such vivid commentary regarding her extraordinary experience of God.

She wrote the seven volumes of The Flowing Light of the Godhead over a fourteen year period, which included songs and poetry. It was published in the vernacular Low German rather than Latin, and was forgotten for some time until its rediscovery in the late 19th century. Some speculate that her visions of the afterlife may have influenced the writing of Dante's Inferno.

She is one of a handful of Christian mystics who left works for us to ponder that describe the mysteries and beauty of an intimate relationship with God. For anyone who is thirsting to connect with the divine, Mechthild's words are a great comfort, and are a kind of map that can guide prayers and meditation. The books and eye witness accounts of such people as Mechthild, Teresa of Avila, St. Francis, Meister Eckart, and others, stimulate longing in seekers and confirm what is possible between ordinary people and God.

Here is another bit of verse from Mechthild:

“A fish cannot drown in water,
A bird does not fall in air.
In the fire of creation,
God doesn't vanish:
The fire brightens.
Each creature God made
must live in its own true nature;
How could I resist my nature,
That lives for oneness with God?”