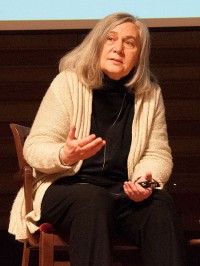 Bill Moyers said in a recent interview with Marilynne Robinson, “You've said in my favorite book that you’ve done, When I Was a Child I Read Books, you wrote that, “the language of public life has lost the character of generosity,” and that, “the largeness of spirit that has created and supported the best of our institutions and brought reform to the worst of them has been erased out of historical memory.””

Pulitzer Prize winner Marilynne Robinson has written three fictional books; Housekeeping, Gilead, and Home; plus several books of non-fiction: Mother Country: Britain, the Welfare State and Nuclear Pollution; The Death of Adam: Essays on Modern Thought; Absence of Mind: The Dispelling of Inwardness from the Modern Myth of the Self; and When I was a Child I Read Books: Essays.

She has taught writing in the northeast and the midwest, and has been the recipient of numerous awards. The depth of her intellect and heart and her grasp of education, writing, and the integration of the virtues, has made her one of the most compelling writers of recent decades.