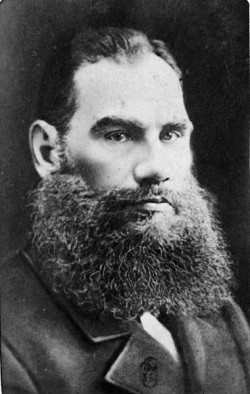 An excerpt from his book, War and Peace, depicting thoughts of the character, Prince Andrei.

Count Lev Nikolayevich Tolstoy, 1828-1910, commonly known as Leo Tolstoy, was one of the most influential writers of 19th century Russia. Tolstoy and his contemporary, Fyodor Dostoyevsky, wrote works of fiction in which their characters wrestled with moral issues of their times.

Tolstoy had a conversion experience, which he described through the character, Levin, in his book, Anna Karenina. The experience drove him to fervent religious expression in later life. His book, The Kingdom of God is Within You, was what some would call a literal interpretation of the teachings of Jesus. The work influenced Mohandas Gandhi, and through Gandhi, Martin Luther King, to lead their followers in non-violent protest against their oppressors.