~The prolific author was born in New Zealand in 1888 but moved to England where she did her best work. 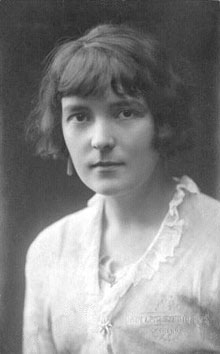 “The mind I love must have wild places, a tangled orchard where dark damsons drop in the heavy grass, an overgrown little wood, the chance of a snake or two, a pool that nobody's fathomed the depth of, and paths threaded with flowers planted by the mind.” Katherine Mansfield—October 14, 1888 - January 9, 1923

Katherine Mansfield left behind over a hundred short stories including Prelude, and The Garden Party, numerous notebooks full of writing, and thousands of personal letters. She grew up in New Zealand but felt quite constrained there. She had four sisters, and a favorite brother, Leslie. He was later killed during World War I. She was sent to Britain along with her siblings, for further education as a teenager, but had to return to New Zealand at age 18. She chafed under the narrow mindedness of the society there. She returned to Britain and lived a rather wild lifestyle for a while, dancing and writing and meeting the literary figures of the time. She eventually became friends with people such as Virginia Woolf and DH Lawrence.

In her journal of 1919 she talked about John Middleton Murry, who later became her husband. He published a magazine called Rhythm. Although they had many differences, she loved him and he believed in her talent. He was connected to the literary avante garde. Picasso, DH Lawrence and others wrote for his publication. Murry and Mansfield gained the nickname, The Two Tigers. Frieda, the wife of DH Lawrence, saw them once on a double-decker bus making faces at each other. Frieda loved them immediately. They became good friends with Lawrence and Frieda. There was a time when they tried to live together but Katherine found them hard to be around because they fought so much. The two couples considered themselves to be outsiders, because the men were of the lower class, and they were unmarried at first.

Frieda was born Frieda Freiin von Richthofen, the daughter of a baron, and a distant relative of the Red Baron, the WWI flying ace. DH Lawrence and Katherine were good friends, they understood each other. They were given to black depressions, and they both later contracted tuberculosis. The Gudrun character in Women in Love was based on her. She was very popular because she was very funny and a great mimic, and tried to make herself as modern a woman as possible. Her twenties included miscarriages by two different men, and health problems that forced her to spend winters in warmer climes, such France.

Her turbulent life finally settled when she became a guest at Georges Gurdjieff’s Institute for the Harmonious Development of Man in Fontainbleau, France. She was there as a guest and did not have to take part in the strict lifestyle. The sixty or so inhabitants were trying to build a community based on the spiritual, physical and mental aspects of the self, expressed ultimately by family love.

In January of 1923 she was there during a feast, and some of the people present noticed “her glowing beauty as though she had reached right through to the cloud of loving that was all around us….as if she had gotten in touch with the essential being of life.”; quoted from an interview with her friend, LM, from the documentary, Portrait of Katherine Mansfield.

Her husband came to visit her at Fontainbleau. Filled with sudden energy she gaily skipped up the stairs ahead of him one evening and stopped short because of a sudden arterial hemorrhage. Her husband ran for two doctors who shut him from the room where she died a short time later. Her companion Ida Baker, known as LM, who had cared for her for many years, commented on the marigolds that were there at her burial. They were her favorite flower.