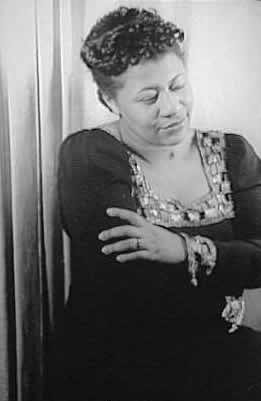 “I owe Marilyn Monroe a real debt … she personally called the owner of the Mocambo, and told him she wanted me booked immediately, and if he would do it, she would take a front table every night. She told him – and it was true, due to Marilyn’s superstar status – that the press would go wild. The owner said yes, and Marilyn was there, front table, every night. The press went overboard. After that, I never had to play a small jazz club again. She was an unusual woman – a little ahead of her times. And she didn’t know it.” Ella Fitzgerald's comments about how her career was helped by Marilyn Monroe.

It is hard to imagine how appalling the difference was regarding the status of blacks and whites in the 1950s. Black performers were not allowed to stay in certain hotels or eat in certain restaurants no matter how famous or talented they were. Norman Granz, the manager of Ella's band was always fighting this kind of racism when they were on tour. An incident occurred in Dallas, Texas, when police entered Ella's dressing room in a hotel, to find her with Dizzy Gillespie and another black musician. They were arrested and taken to jail. Miss Fitzgerald later said, “And then when we got there, they had the nerve to ask us for an autograph.”

Years later, playwright Bonnie Greer saw a brief clip on the television show Biography regarding the friendship between Marilyn and Ella. She was inspired to write a play about their friendship which she entitled “Marilyn and Ella.” It opened in 2008. Said Greer regarding the writing of the play, “One of the things that's important to me is to have a black woman who is not conventionally beautiful worshipped by one of the most beautiful women in the world who can see her inner quality.” She added, “For me, at the most profound level, it's about beauty: beauty as a curse, beauty as a desire. It's about inner beauty. It's about the beauty of real work, of a gift, they both were gifted.”

It is wonderful to think that acts of kindness like this can help reshape the world. We know that the race issue is still causing suffering to this day. When people can see beauty in each other as these women did, prejudicial behavior can transform into respect, friendship and love.

Below is a clip about the Mocambo event: