E. O. Wilson - Humanity Today is Like a Waking Dreamer

~ Excerpts from "The Social Conquest of Earth" and "Save America's Forests" 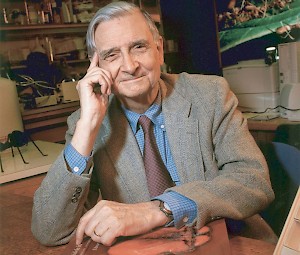 Posted by Kimmy Sophia Brown
The following quotes are from Edward O. Wilson's book, The Social Conquest of Earth, and his slideshow, Save America's Forests.

“Humanity today is like a waking dreamer, caught between the fantasies of sleep and the chaos of the real world. The mind seeks but cannot find the precise place and hour. We have created a Star Wars civilization, with Stone Age emotions, medieval institutions, and godlike technology. We thrash about. We are terribly confused by the mere fact of our existence, and a danger to ourselves and to the rest of life.”

“Now when you cut a forest, an ancient forest in particular, you are not just removing a lot of big trees and a few birds fluttering around in the canopy. You are drastically imperiling a vast array of species within a few square miles of you. The number of these species may go to tens of thousands. ... Many of them are still unknown to science, and science has not yet discovered the key role undoubtedly played in the maintenance of that ecosystem, as in the case of fungi, microorganisms, and many of the insects.”

Edward O. Wilson is an American biologist and the author of numerous books. He has been dubbed “the father of biodiversity” and “the father of sociobiology”. He is the world's foremost authority on ants and insects, and their vitally important role behind the scenes, safeguarding the earth's health. He is one of the greatest thinkers in the world today, and is a common sense communicator. If his insights and far-seeing wisdom about nature can be taken to heart by the nations of the world, we can save ourselves from complete ruin before it is too late.