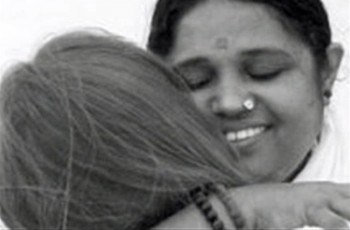 Anyone who has the courage to overcome the limitations of the mind will attain the state of universal motherhood. This is a love and compassion felt not only towards one’s own child, but also towards all people, animals, plants, rocks and rivers. It is a love extended to all of nature and all beings. to one in whom the state of true motherhood has awakened, all creatures are her children. this awakening of love, this motherhood, is Divine Love. This is God.

These are the words of Mātā Amṛtānandamayī Devī, otherwise known as Amma.

Amma is a Hindu spiritual leader and guru, well known for traveling around the world giving talks, followed by embracing members of the audience one by one. The following passage from Wikipedia explains how she began the practice of hugging:

Amṛtānandamayī's form of giving darshan* is hugging people.  As to how this began, Amṛtānandamayī said, ‘People used to come and tell [me] their troubles. They would cry and I would wipe their tears. When they fell weeping into my lap, I used to hug them. Then the next person too wanted it... And so the habit picked up. ’ Amṛtānandamayī has embraced more than 33 million people throughout the world for over 30 years.

You can find out more about her at amma.org.