The Wilderness Passion of John Muir 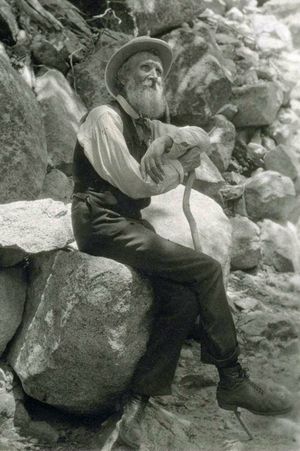 John Muir was born in Scotland in 1838 and settled with his family in Wisconsin in 1849. His father was strict, leading the family in a life of hard work by day and learning Bible verses by night. John Muir always loved nature and eventually attended the University of Wisconsin. One of his professors, Ezra Slocum Carr, and his wife, Jean Carr, introduced Muir to the writings of Ralph Waldo Emerson and Henry David Thoreau.

He went on many wandering journeys all over North and Central America, exploring the wilderness and writing about his experiences. He eventually became friends with Teddy Roosevelt, and was partly responsible for establishing many national parks. He spent a lot of time at Yosemite, and inspired protection of the redwood forest north of San Francisco, now called Muir Woods. 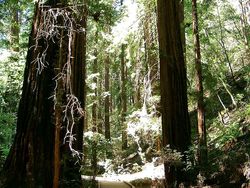 “In 1908, when John Muir learned that a redwood forest near San Francisco would be named in his honor, he declared, ‘This is the best tree-lovers monument that could possibly be found in all the forest of the world.’ William and Elizabeth Kent thought so, too. The couple purchased the land to preserve its beauty and restful wilderness; and soon after, they donated it to protect it from destruction.” [sic]

Always a conservationist, he was one of the founders of the Sierra Club and remained their first president until his death in 1914. The following excerpts come from an essay he wrote entitled; “A Near View of the High Sierra”, from his gem of a book, Wilderness Essays. Also included in this account is a casual anecdote about climbing a rock face where he nearly met his death. He was saved by what he attributed to a sudden gift of divine sight that guided him to what seemed to be microscopic footholds and handholds that enabled him to climb to safety.

Most people who camp nowadays have down sleeping bags, dried bags of rice and beans, camp stoves, fleece jackets and expensive boots. The only provisions he mentions are tea and bread. He was really an unencumbered man, epitomized by the incidental comment in the excerpt below, “I had no blankets!” What a gnarly and sturdy man he must have been, what hardy stock! This book allows us a peek into the soul of this precious man who did so much to preserve our natural treasures. 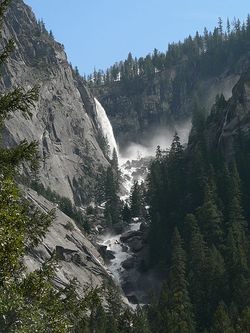 Excerpts from "A Near View of the High Sierra", from the book Wilderness Essays:

“I was acquainted with its fountains, which, fortunately, lay in my course. What a fine traveling companion it proved to be, what songs it sang, and how passionately it told the mountain’s own joy! Gladly I climbed along its dashing border, absorbing its divine music, and bathing from time to time in waftings of irised spray. Climbing higher, higher, new beauty came streaming on the sight: painted meadows, late-blooming gardens, peaks of rare architecture, lakes here and there, shining like silver, and glimpses of the forested middle region and the yellow lowlands far in the west. Beyond the range I saw the so-called Mono Desert, lying dreamily silent in thick purple light – a desert of heavy sunglare beheld from a desert of ice-burnished granite.”

“I made my bed in a nook of the pine thicket, where the branches were pressed and crinkled overhead like a roof, and bent down around the sides. These are the best bedchambers the high mountains afford – snug as squirrel nests, well ventilated, full of spicy odors, and with plenty of wind-played needles to sing one asleep. I little expected company, but, creeping through a low side door, I found five or six birds nestling among the tassels. The night wind began to blow soon after dark; at first only a gentle breathing, but increasing toward midnight to a rough gale that fell upon my leafy roof in ragged surges like a cascade, bearing wild sounds from the crags overhead. The waterfall sang in chorus, filling the old ice fountain with its solemn roar, and seeming to increase in power as the night advanced – fit voice for such a landscape. I had to creep out many times to the fire during the night for it was biting cold and I had no blankets. Gladly I welcomed the morning star.”