[Editor's Note: Click on the photos to see larger images.]

Yesterday I sat on black lava rocks gazing out over the cobalt waters of La Perouse, watching for signs of my old friends, the spinner dolphins. They often come into this sandy bottomed bay to sleep after a night of hunting. They sleep with half their brain awake – and one eye open. The other half sleeps. They are conscious breathers, and so they have to stay awake enough to come to the surface for regular breaths. They never really fall asleep all the way, like we (hopefully) do.

When they arrive, they swim the mile or so across this big blue bay, back and forth, back and forth. The sentinels on the edges of the pod – those who stay awake and scan for predators – humans or sharks – stay awake. These may jump, leap, and spin out of the water, doing somersaults and other wild acrobatics in the air – hence the name spinner dolphins. They'll allow human guests at times, those of us who happen to be lucky enough to be in the water at the same time. Sometimes they bring a leaf along on their fin to play the “leaf game,” as we call it. Passing it off, back and forth, between another dolphin or human, or whoever cares to play.

But the dolphins did not appear today. We scanned the waters for their puffs and wisps of breathy air and water, or splashes and spins, but none showed – despite us singing our favorite dolphin swimming songs, and sending out our playful invitations for them to join us. We finally moved on to another area known as the “dumps,” where we waded into crystalline turquoise water and swam for an hour, hovering over yellow tangs and parrot fish, butterfly fish and cleaner wrasses. We hunted for signs of turtles, but did not find any of them today either.

It did not matter to me. Today I was simply moving with ecstatic grace in total blissful warm turquoise Waters and listening to underwater sounds of the humpback songs.

I know I will have other opportunities to meet with Honu – the turtle people. They are always in close to shore where we swim. They taught me long ago about breath...how to hold it underwater for longer and longer periods of time while quieting my mind and Being watery in the Water realm.

At the campsite on the shores of Olawalu, where my friend and I stayed last week, the Honu were plentiful. In fact, there must have been hundreds of them. We watched their heads bobbing on the surface again and again over a wide area of the reef. A Honu can sit underwater for a very long time, holding its breath. Eventually, very slowly, it moves out from under its rocky shelter and flies slowly to the surface with its long fins, like an eagle soaring through air. Again, from the Honu, I learn about flying through liquid sky. 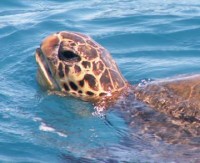 Olawalu can be scary. Olawalu is where we used to do the land-based whale research, sitting on a petroglyph hill below the west Maui Mountains. But when I first moved to Maui in 1996, a woman swam out from Olawalu to what she thought was a pod of dolphins. Instead, it was a shark feeding frenzy, and she became part of their meal. I have always been fearful of swimming around Olawalu since then; it is known as a shark-hunting ground. Not that sharks are hunting for humans, but this year, there have been eight shark-biting-human incidences, and two actual fatalities from sharks – one just a few weeks ago. That's very unusual. But these did not occur at Olawalu, in fact, they occurred in the area where I always used to swim, and where I always felt very safe!

I camped at Olawalu recently, and sat by the sea one afternoon, when suddenly a shark fin emerged in the shallows before me. It was small – a four-foot reef shark. I watched the dorsal and tail fins slice through the water for forty minutes, ten feet offshore, while it hunted for dinner. I am not afraid of a reef shark. I'm afraid of the Tiger shark, the Great White, the Galapagos shark. Those big possibly-human-crunching ones worry me. But not enough to keep me and my friend out of the water the next morning when I noticed whales outside the reef about 1/4 mile in front of us. They were moving slowly enough that I thought we might have a chance to meet them. We donned our snorkel gear and took off across the shallow reef to the outer edge where the water color changed to a deeper hue, and the coral fell away.

Diving underwater we could feel a whale was nearby. It was a singer! The vibration of whale song was rattling our bones. The singing humpbacks hang head-down underwater, vibrating their song onto the ocean bottom, and bouncing it across the sea for miles and miles and miles. You may have heard it on recorded music. Paul Winter, Judy Collins and others have incorporated their song into their music. But hearing it under water is totally different.

We are made of water. When we are immersed in water, sound vibrations penetrate the body; while in the air, the waves bounce off of us. This is partly why the Navy's low frequency sonar games are so deadly to cetaceans (but not the only reason). We laid on our backs, floating in the mother ocean in which it’s impossible to sink...with our ears submerged enough to still hear the whale song. The ocean rocked us gently and our bodies were penetrated by whale voice. We sang back in response. Humming, grunting, homing... I wondered... what if the whales are actually God, singing the world into existence with their Word/voice... vibrating the planet and generating life forms.

This is the life that inspires and excites me in Maui. This water life, whether it be immersion in the deep blue, or watching it in the form of rainbows... sun meeting water in air, it is rich, vibrant, vibrating.

But I only see a tiny part of the water world here... here, where I can almost pretend everything is wonderful. Almost, but not quite. Recently I learned that the National Marine Fishery Service is proposing to allow the Navy to harm marine mammals up to 9.5 million times in the Hawaii and Southern California Training Ranges and 21.8 million times in the Atlantic Training Range over a period of five years. (www.biologicaldiversity.org)

“And how many marine mammals are actually out there?” asked one friend. “And how are they going to count them?” another asked today. I guess with that number, they won't have to count. Just don't worry about who dies, is essentially what it all means. 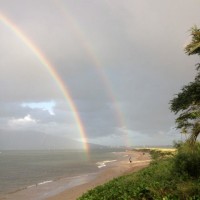 And recently I read about a man who sailed across the Pacific and saw no birds, caught only two fish, and saw no cetaceans along the way. Essentially, he said, it was dead. Empty. Void of all the life he had encountered years before on his first sail across the seas. All he saw was garbage. And silence. Starfish are turning to mush; turtles are being blinded with eye tumors, cetaceans, birds and turtles are turning up dead, their stomachs full of plastic. The Ahi tuna are radioactive with Cesium 38 from Fukushima; radioactive debris is floating in a mile long swathe off the coast of Kauai. Much of the reef in Maui is dead.

We found a living reef off Olawalu, but there were hardly any fish around... what happened to them? I can still float in the bliss of embodiment, rocking in the great mother ocean arms, but I wonder if the world will collapse when the whales are not here to vibrate life into being any longer. 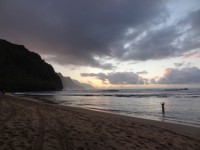 I make my prayers to the ocean gods, in song and gratitudes.

What if we all gave thanks to the singing whales? What if we all listened and knew the value of their song? Would the world ring with a different tune than it does now?

“One regret, dear world, that I am determined not to have when I am lying on my deathbed is that I did not kiss you enough.” - Hafiz

Leslie Foxfire Stager is an author, a world traveler, a midwife, a massage therapist, a photographer, a nurse. Her www.touchforbirth.com website states:

"Leslie is also a wilderness rites of passage guide, and has been walking with women between the worlds of birth and death, metaphorically as well as physically, since 1980."

We are delighted to feature her work here.