Local boys help the world by serving their community! 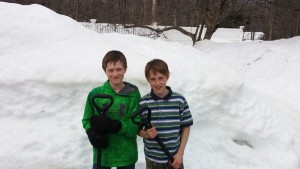 The onset of heavy snow in deep Maine winter can be compared to that thing people say about a woman having a baby – that you forget what it’s like until it happens again. And by the time you’re in the middle of it, it’s too late. You just have to push on and hope that you live through it!

So it snowed a few times this winter. Yup. We expected it. We coped, we managed, we shoveled. And the snowbanks grew high. Then higher. Then it was becoming hard to know where to put it. Then we had three storms in one week, dumping several feet on us that made our snow drifts morph into our very own personal Himalayas. By the time we tried to clean up after those storms we were limping and swollen. Even our ice packs were sore. We were depressed. It seemed like winter would never end. We needed help.

We checked local professional snow removing services but they charged a hundred dollars a man hour. Yikes! So we called the local hardware stores to see if they knew of anyone else, and there was a poster on their wall. Two boys had a shoveling service! My husband called them. That very evening their dad drove them to our home. They came to the door in their snow gear and headlamps. Best of all they were equipped with muscles and smiles!

Soon we heard the merry sound of ice and snow being shoveled and chopped to death. They scaled the roof-high snowbanks and raked down two feet of snow from the roofs. They climbed ten foot banks and dug out buried windows. They chopped ice from the dog yard so we could open her gate. They lifted barges and toted bales. They sweated and strained. They prevented overwhelming landslides, and abated avalanches. They sword played with threatening icicles. They defied the elements and transformed a treacherous landscape into a place where people and dogs could walk again without fear. They came back twice more – once with their dad, and the other time with their dad, and their mom came too!

We are so grateful to William and Michael (and their parents!) for starting their business and being willing to work hard. Because of them, we didn’t end up calling 911 to save us from the brink of abominable snowstorm madness! Email us if you want their contact information. They shovel in winter and rake in fall. They do outdoor jobs big and small. They’re willing and strong, so give them a call!