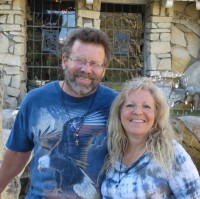 What a time we’re living in! One of the latest amazing developments for the sake of humanity is the innovation of SOLAR ROADWAYS, created by Scott and Julie Brusaw.

The introductory page of their website has several videos explaining their idea and how they hope to implement it, plus a link to their Indigogo funding campaign – which as of this writing has been extended at Indiegogo's suggestion until June 20th, at 11:59pm PT.

They’ve already surpassed their One Million Dollar goal and have reached $1.9 Million Dollars. We made a small donation, I wish it had been more!

Watch as many of the videos on their site as you have time for; they are profoundly inspiring. Donate to their Indigogo project, and then if you don’t have a job during the time when they’re implementing the plan, they may have a job for you!

If everything they plan to do works out as laid out in their vision, this could be one of the biggest transformations for the sake of the planet. Visit their website at solarroadways.com.